In episode #1 we go over what the VLOG is about and what we plan on covering. Episode #1 is the one episode everyone should watch so they can set themselves up for what's to come.

In this episode Harry Tchinski talks about Self Distribution and the history as to why the indie filmmaker is not making the same amount of money that they used to. But don't worry it's starting to make a turn for the good. Watch and learn

Be sure to pick up the book "It's In The Can Now What? " The information and concepts that we deal with in this series are gone over exclusively in the book on Amazon. It's available in both printed Format and Digital. To find out more about the book click on the short video below, or click the button just below the video.

The topic for this VLOG is ULTRA LOW BUDGET filmmaking. This is a broad ranged topic, and we will be going over this topic throughout these series of episodes.

WHY AM I DOING A VLOG ON FILM PRODUCTION and DISTRIBUTION

In this episode, we talk about getting your film out to the public. The episode covers a lot of different avenues within the subject. Yes, it's very light but the scope of this topic, like many others in this business, is vast. So it will be something that we will be going over quite a bit.  It's suggested that you watch it to get a grasp of the problem so you will have a better understanding going in.

The big reason for creating this VLOG was to help get the word out to indie film producers that it is possible to get your film picked up by a GOOD DISTRIBUTOR. But, that's not the only reason. There are many problems associated with film production. I feel that we all need to talk about it. One wrong move with a film can kill it.

I've had films sent to me for help, and we've helped them to get with a decent Distributor. Of course, this is before they've signed a deal with one.  If you've signed a deal with an EVIL DISTRIBUTOR, then all you have is the court process and that can get really costly.  So, why don't we try to avoid that situation and do things the right way first? Why not find out the best way to do something about it before you do something destructive. After all, you've put so much time into your opus why not take a few days or weeks to make sure it is GETS A GOOD HOME.

Maybe you want to go the DIY route, meaning Self Distribution which is now called Alternative Distribution.  Okay, we will be going over this also. I'm sure that many of you will be writing to me on the subject, and I will try to explain why I don't go that route. The reasons might make you think totally differently than you do today. I will explain that more as we go along through the series of VLOG episodes. 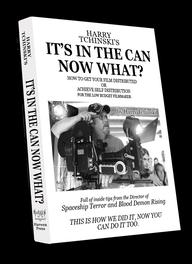 GETTING YOUR FILM OUT TO THE PUBLIC

VLOG in order of episodes